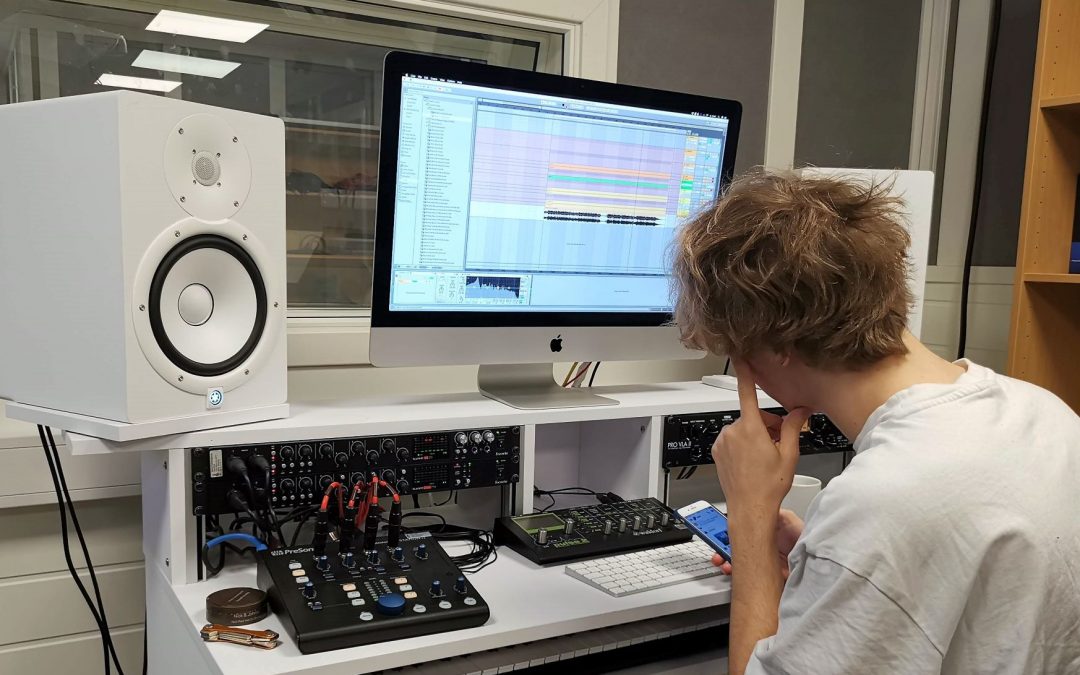 So – how was your week here at Toppen?

“It was very enlightening! I have never been at a school like this before, so it has been fun to see what the life here is like.The environment is very heartwarming and genuine. It’s been very humbling to sit down with the students because they were all so interested and happy to learn new things. That part was honestly kind of contagious, so now I feel super inspired myself as well! I also learned that it was impossible to guess who were attending what line. There were no groups or any kind of division between “the cool people” and the others, which was awesome to see. The whole school just has a great atmosphere!”

“This has honestly been more than a nice experience and I’ve learned a lot. I was sort of scared about having to talk in front of the class because I thought there was going be way more students, but there were only 10 so that part turned out fine. I’ve never experienced anything like this, where people are studying all of these different subjects in the same school. It’s so cool because everyone seems to get along and want to partake in different recreational activities. They all give 100% effort and there is no slacking, no matter what they’re doing. There’s also such an open environment and there’s less of a divide between students and teachers than what I’ve seen before.”

What is your best memory from this week?

“The «ten minute challenge» was definitely fun. Everyone’s character kind of revealed themselves within the different songs we were making. It’s something I’d never get the chance to do that anywhere else. When would I ever be able to gather 10 other producers in the same room and just make music for fun like this? Never!”

“I honestly can’t pick out anything special, it all was fun. Being on top of the mountain “Øyfjellet”at 8 in the morning was very special to me. Also, converting Markus into making Lo-Fi was very fun!”

What sort of relationships did you get to the students/teachers?

“The relationships I made with the students felt very personal and genuine. It also felt very equal, as they were just as interested in us as we were in them. I think music production is very interesting because you can do whatever you want and express yourself the way you want, because the focus is on creativity. So there were so many different people just being themselves whom were fun to meet!

The teachers were cool too, they didn’t even feel like teachers!”

“People were showing a genuine interest in us, which was very nice. I didn’t feel awkward at all here because people were so welcoming. Everyone is such a character! Other music schools undermine the creativity because the teachers take away the creative part and only think about the technical part. Here it’s not like that. This place inspires creativity. I want to go home and write an album now. People can be themselves entirely and there is just no judgement!”

“2 years ago I definitely would of. My path is different now so it wouldn’t really workout the way things are for me today.”

Have you guys learned anything from being here?

“Yes I have. I think getting to a place that’s so distant from what you usually surround yourself with is very healthy. It was very humbling to connect with the people here. I honestly just feel grateful! I realized how thankful and appreciative I am of what I do and how lucky I am to be able to do this. It gave me some sort of clarity of my purpose. So now I’m just stoked to continue my journey!”

“Of course! I’ve learned a lot of things about myself, not just musically like I maybe expected. I’ll definitely take that with me on my journey.  This has made me realize that music is what I want to do, and that it’s my purpose. It has also been fun to see that people here do things because they WANT to and not because they have to, which is something I’ll take with me as well!”